Summary: The Justice league groups up and travel to the Apokolips to kill the Darkseid, but many of them die and rest are put up to slavery and the Darkseid takes control over the earth and destroys it. Justice League Dark: Apokolips War has its own distinctive Plot twists and an Amazing Climax, which Marvel feared to work on, in spite of having shown cues it could have. 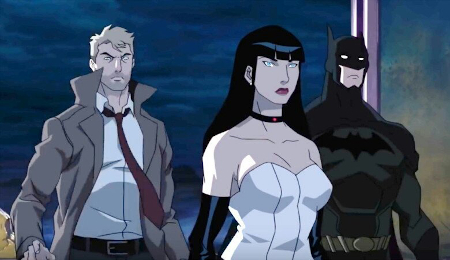 Later, the Darkseid completely takes over the earth along and his army and Para dooms roam around the earth and with the devices known as reapers which mine the earth’s core and kill anyone they encounter on their way. The surviving members of the justice league team blame Clark Kent, who has no power left as the Darkseid injects him with liquid Kryptonite for their failure.

Is it any good?

Clark rescues Raven and along with John Constantine to help him locate Damian and rescue the Batman who is under a brainwash by the Darkseid. Etrigan also joins the Clark Kent to help him find the Damian, when they locate the Damian it reveals that most of the titans are dead and only one who survived was the Starfire whop revives the Nightwing using his Lazarus pit but he himself is converted into a Cyborg.

After that, the group meets Clark Kent’s wife Lois Lane, who has recruited all the members of the suicide squad which is now led by the Harley Queen after the death of the Amanda Waller due to cancer, and they discuss their plan to return to the Apokolips to kill the Darkseid and to save the justice league members who are put up to slavery and group up to fight against the Darkseid.

The group splits into two after finding out about the Lex luthor’s betrayed them by informing the batman who was under brainwash from the Darkseid about the plans they make to kill the Darkseid. After arriving on the Apokolips the team is attacked by the furies sent by the Darkseid after finding out about their plan from the batman and the attack leads to Etrigon’s death, But John Constantine manages to free Diana from the Darkseid’s slavery, and then they both manage to rescue the Flash who was being used to run and power the whole Apokolips and the john Constantine finds that the present-day situation is caused by the flashpoint which was caused by the Flash.

Back on earth, at the lexcorp Lois’s team becomes surrounded by the group of the Para dooms sent by the Darkseid and they are initiated for the self destruct. With the help of Cyborg, she is able to transmit a message to the Clark on Apokolips letting him know of their situation on earth due to the Para dooms, after Constantine and Damian are revived by the help of Raven and Zatanna, Cyborg then tells them about his plan to transfer the Para dooms to the Apokolips by creating a black hole which will suck them into Apokolips but it will take time and they will need to distract the Darkseid in order to perform this task successfully and he has no other way to overcome this situation, but finally they are able to distract the Darkseid and then finally kill the Darkseid which results in the damage of the earth’s core and he tells the flash to create another flashpoint hoping in the betterment of their current situation and saving the earth.

In the end, they are finally able to defeat the Darkseid, but while doing that the justice league and the earth get completely demolished. As far as they can tell the earth is too far gone to be brought back to normal. So then they start to discuss what they can do to restore what they have lost while they discuss John Constantine tells the flash to create another flashpoint as they have no other way left he convinces the team members by telling them that it won’t be any worse than the situation that they are I right now so the flash gets up and starts running and the film comes to an end leaves us wondering what happens next.

What Are The Best X-Men Movies?

What Is The Best Order To Watch DC Movies?

What Is The Best Order To Watch The X-Men Movies?